Researchers show how a tiny change can have a big impact on artificial protein nanostructures Scientists working at Jagiellonian University’s Malopolska Centre of Biotechnology, working with international colleagues, have shown that they can cause a nano-sized spherical protein cage to undergo a major change in shape simply by changing a single amino acid.

Designing artificial structure from biological materials is a new area of synthetic biology with potential to produce new materials and even “nanorobots”. One of the most interesting areas of research within this field is protein cages – hollow, ball-like protein structures which have demonstrated potential as vaccines or drug delivery systems. One such protein cage, TRAP-cage is made by multiple proteins held together by gold atoms which act as a kind of atomic “glue” holding the proteins in place. For the glue to work a particular amino acid (the building block of proteins) known as cysteine, is required. This provides just the right environment for the gold atoms to “stick”. What the researchers wanted to know is what would happen if they changed the position of the cysteines, would the cage still form? “This was not guaranteed” remarks Jonathan Heddle, the head of the lab that carried out the work, “Changing the position of the connection means that the angle between the constituent proteins changes.” Imagine changing the angles between the hexagonal and pentagonal patches that make up a football away from the ideal; the shape would change. Surprisingly though, what the researchers found was that what resulted was not an aggregated “mess” but a different kind of cage, more elongated (like a rugby ball) and with around 17 % fewer proteins. “It turns out that the proteins are able to compensate for the angle change by making a more distorted shape and losing some of the proteins in the process,” said Prof. Heddle.
The work is interesting as it provides insight into how artificial protein containers can be engineered and molded into different shapes for different applications. It also is of interest from an evolutionary perspective: Typically, evolution is thought to occur gradually, but this work is an example where major structural changes in large complexes come about from a single amino acid change.
The work was a collaboration with the labs of Simon Scheuring at Weill Cornell Medicine in the USA and Philip Kukura and Justin Benesch at The University of Oxford, UK.
The paper was published in ACS NanoscienceAu, access it here:
https://doi.org/10.1021/acsnanoscienceau.2c00019 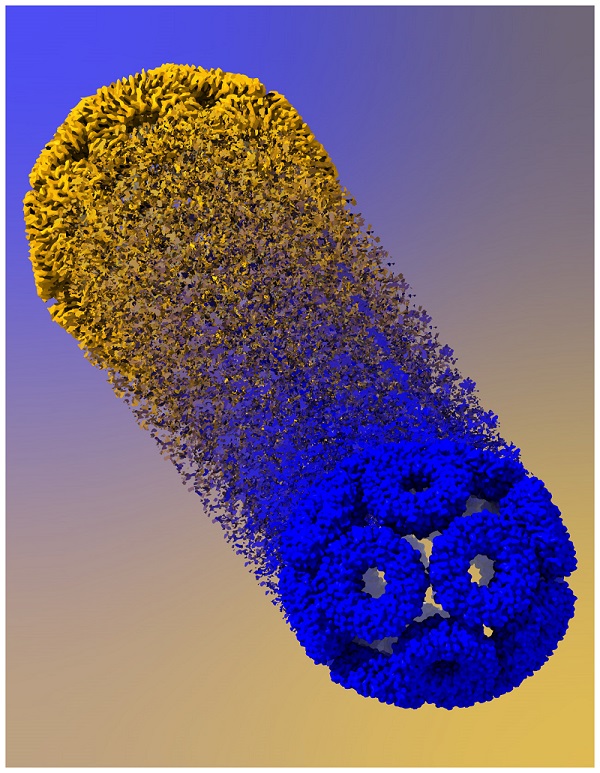