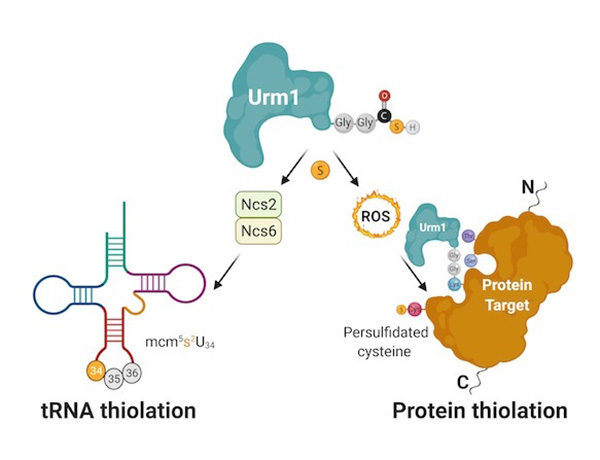 Persulfidation is a unique posttranslational protein modification that protects our cells and proteomes against oxidative stress and ageing. Very recent work from the Malopolska Centre of Biotechnology (MCB UJ) shows that this small chemical modification is installed by a cellular protein, called Ubiquitin related modifier 1 (or short Urm1).

Persulfidation is a unique posttranslational protein modification that protects our cells and proteomes against oxidative stress and ageing. Very recent work from the Malopolska Centre of Biotechnology (MCB UJ) shows that this small chemical modification is installed by a cellular protein, called Ubiquitin related modifier 1 (or short Urm1). Not only, is the pathway activated during oxidative stress, but it is also surprisingly linked to another type of protein modification. The study provides new molecular insights into a previously unrecognized cellular mechanism and indicates that Urm1-based therapeutics could play a significant role in decelerating ageing. The ground-breaking results were recently published in "The EMBO Journal" - E2/E3-independent ubiquitin-like protein conjugation by Urm1 is directly coupled to cysteine persulfidation.

An international team of researchers from the Max Planck Research Group at the MCB of the Jagiellonian University in Krakow revealed the function and molecular mechanism of the Urm1 protein. This ancient Ubiquitin-like (UBL) and sulfur carrier protein (SCP) stands at the origin of all eukaryotic Ubiquitin-like proteins. The research team in Krakow headed by dr hab. Sebastian Glatt (Glatt Lab) was strongly supported by collaboration partners in Germany (Universität Kassel)  and Switzerland (Universität Bern).

In detail, the study shows that the action of Urm1 is able to protect other enzymes under oxidative stress. Urm1, previously known to incorporate sulfur into transfer RNA (tRNA), is also able to deliver sulfur atoms to specific target proteins. This process, called persulfidation, is an evolutionarily conserved constitutive defence mechanism against oxidative stress that is critical during ageing. The team managed to reconstitute the cellular process in the test tube and to obtain the first high-resolution crystal structure of an urmylated target protein. Complementary biochemical analyses confirm the direct transfer of sulfur from thiocarboxylated Urm1 onto cysteines in the target proteins. Foremost, the authors show that the cysteine persulfidation is a direct consequence of Urm1 attachment, which apparently can take place on lysine, serine and threonine residues.

Doctoral student and lead author, Keerthiraju E. Ravichandran, explains “When Nobel laurate Yoshinori Ohsumi discovered and named Urm1, he stated that understanding the Uba4-Urm1 system will provide deep molecular insights into the evolution of all other UBL conjugation systems. Two decades later, our work shows that the specific attachment of UBLs in eukaryotes has likely evolved as a side reaction that is necessary to protect enzymes by Urm1 under oxidative stress.” He also adds “I imagine the Uba4-Urm1 system to act like Wonder Woman or Thor, who are deemed to be silent guardians and watchful protectors throughout the times.“ The last and corresponding author dr hab. Sebastian Glatt summarizes “The discovery that thiocarboxylated Urm1 can conduct targeted persulfidation of specific cysteines is unprecedented and has not been described for any eukaryotic protein. Foremost, our work redefines the Urm1 pathway as an evolutionarily conserved route that simultaneously delivers sulfur to RNAs and oxidation-prone proteins.”

Figure caption: Urm1 is able to deliver sulfur to certain tRNAs and proteins. The Urm1-mediated tRNA thiolation requires additional downstream enzymes, but the persulfidation of cysteines by Urm1 is directly catalysed by an UBL-like conjugation reaction that is triggered by oxidative stress.

Last but not least, the authors use their newly obtained knowledge to re-engineer known model proteins (e.g. fluorescent proteins) for new biotechnological application – for this reason, the lead authors also filed a patent application with the excellent support of the University tech-transfer office (CITTRU).

The work was mainly supported by the First Team Grant (POIR.04.04.00-00-1B00/16-00) from the Foundation for Polish Science and OPUS16 grant (2018/31/B/NZ1/03559) from the National Science Centre. This project has also received funding from the European Research Council (ERC) under the European Union’s Horizon 2020 research and innovation programme (grant agreement No 101001394). In addition, the MCB Structural Biology Core Facility (supported by the TEAM TECH CORE FACILITY POIR.04.04.00-00-43F6/17-00 grant from Foundation for Polish Science) provided crucial support and essential equipment.

The article was recently published in The EMBO Journal and and can be accessed here: