What role does a tRNA modification complex, called Elongator, play in brain development? Publication by scientists from the MCB JU in EMBO Molecular Medicine 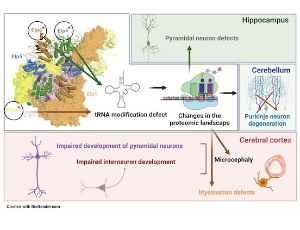 Researchers from the Malopolska Centre of Biotechnology of the Jagiellonian University, together with Australian, Turkish and Canadian colleagues, have found a link between defects in the cellular protein production machinery and neurodevelopmental disorders (NDDs), characterized by an inability to reach cognitive and motor milestones.

Scientists showed how genetic mutations in patients affect the Elongator activity and lead to severe clinical symptoms. The study provided the first clinical evidence for missense mutations in the Elongator accessory subcomplex ELP456 to cause neurodevelopmental disorders. Genome-wide analysis allowed identification of pathogenic variants in patients with severe clinical presentation of NDDs. Further modelling of the patient-derived mutations in mice resembled the complex neurodevelopmental phenotype and revealed neuron-specific consequences of the found genetic mutations.

„We report patient-derived substitutions in the accessory ELP456 subcomplex that affect different types of neurons that are different from previously known mutations found in the catalytic core of the complex” – explains dr hab. Sebastian Glatt, the senior author and head of the Max Planck Research Group glatt-lab.pl, that carried out the experimental work in Krakow. This provides a novel concept in the field that depletion of specific tRNA modifications in patient cells may induce specific changes in the cellular proteomes.
Researchers have sought to understand the molecular consequences of the results obtained from patient cells. With the help of the Structural Biology Core Facility at MCB and modern cryo electron microscopes at the National cryo-EM facility Solaris the group also visualized the macromolecular particles at high resolution and obtained atomic models of the human and murine ELP456 subcomplexes. This facilitated the research and allowed to precisely localize the position of patient-derived amino acid substitutions in the proteins.

„Interestingly, our findings highlight that Elongator assembly in vitro and in vivo was not impeded by the mutations, while its binding affinity for specific tRNAs and its biochemical activity were strongly reduced” says dr Monika Gaik, a postdoctoral researcher and first author of the paper.

The presented work combines clinical data, animal models with whole body mutagenesis and biochemical studies to understand a fundamental basis to the role of the Elongator complex in the development of neurons and brain structures. 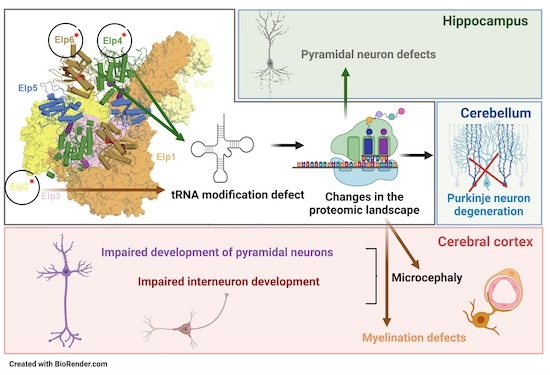 Visualisation: The Elongator complex plays a crucial role in neurodevelopment. Patient-derived amino acid substitutions in the accessory Elp456 subcomplex were shown to affect different types of neurons than previously known mutations in the catalytic core of the complex. Source: EMBO Molecular Medicine - https://doi.org/10.15252/emmm.202115608

The work was supported by the Foundation for Polish Science and European Commission founder of the prestigious ERC Consolidator grant of dr. Glatt.

This project has received funding from the European Research Council (ERC) under the European Union’s Horizon 2020 research and innovation programme (grant agreement No 101001394).

The work was recently published in EMBO Molecular Medicine [EMBO Mol Med (2022)e15608] and can be accessed here:

Functional divergence of the two Elongator subcomplexes during neurodevelopment