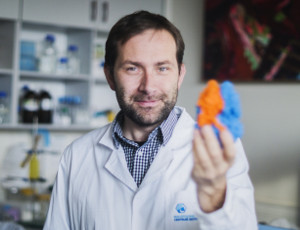 Dr Przemysław Grudnik from the Małopolska Centre of Biotechnology of the Jagiellonian University (JU MCB) was awarded the Polish Intelligent Development Award 2020 in the Scientist of the Future category. He was recognised for his research on molecular mechanisms controlling the protein synthesis process and on the structures of enzymes involved in neoplastic processes.

In the former project, the team led by Dr Grudnik studies a unique modification of proteins - hypusination. Disturbances in the synthesis of the modified amino acid - hypusine have been detected in neoplastic processes and in neurodegenerative diseases. The project outcomes will contribute to the understanding of the mechanisms of hypusination and may translate into the development of new therapeutic strategies in the future.

“In our research, we use techniques from the area of structural biology, including X-ray crystallography and cryo-electron microscopy (cryoEM) to describe at the atomic level the proteins involved in the hypusination process. So far, the tangible effect of our project is explaining how the DHS protein uses its natural substrate - spermidine to modify the eIF5a translation factor. Another result of the project will be to understand the mechanisms responsible for DHS protein deficiency, causing a recently discovered rare neurodegenerative disease. Additionally, the discovery of specific chemical compounds will allow us to modulate (inhibit or activate) the hypusination process depending on the needs. It is worth emphasizing that in our research we are using not only large European research infrastructure such as synchrotrons in Berlin or Grenoble, but also the highest-class cryoelectron microscope located at the Solaris synchrotron in Kraków. The entire project is supported by the Structural Biology Core Facility established at the JU MCB.

The Polish Intelligent Development Award is bestowed by the Centre for Intelligent Development, which for 5 years has been distinguishing innovators and investors, people, and organizations whose way of acting and thinking has an impact on intelligent and sustainable development of society and economy. It is a unique and very prestigious award in the business and scientific community, popularizing, promoting and appreciating the authors of innovations. Most of the awarded projects are at the implementation phase. The award is a token of respect for the idea, as well as the plan for the future of the project and the approach to its promotion.

The award ceremony will be held at the end of November during the 5th Intelligent Development Forum.

Information on the unique research infrastructure of the Structural Biology Core Facility at the JU MCB is available at www.structuralbiology.pl.