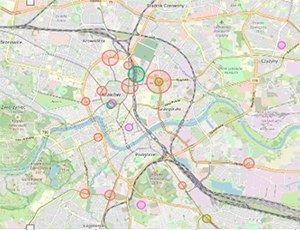 A few weeks ago, scientists from the MCB, thanks to the support of the city authorities and the Municipal Police, started research on the determination of environmental contamination with the SARS-CoV-2 virus in Krakow. The aim of the research is primarily to determine possible countermeasures and assistance to the city and its residents in this difficult period.

Close cooperation with the City of Krakow

The City of Krakow, in cooperation with scientists from the Malopolska Centre of Biotechnology of the Jagiellonian University (under the guidance of Prof. Wojciech Branicki, Dr. Paweł Łabaj, and Prof. Krzysztof Pyrć) carried out an analysis of the contamination of urban space with the SARS-CoV-2 virus. Thanks to the invaluable help of the Municipal Police, since mid-March 20 locations in Krakow were monitored, which were selected based on the analysis of human migration processes. In mid-March, in over 40% of cases, the genetic material of the virus could be detected, but it seems that the actions taken by the City of Krakow to disinfect public places have brought results. In the following weeks the data were becoming increasingly optimistic, and at the beginning of April at most one location gave a positive result. All the data were passed on to the city authorities and will serve to improve safety. The work will continue and will allow quick identification of the threat or indicate the growing virus hazard before human cases appear.

Spreading potential and the sampled stops 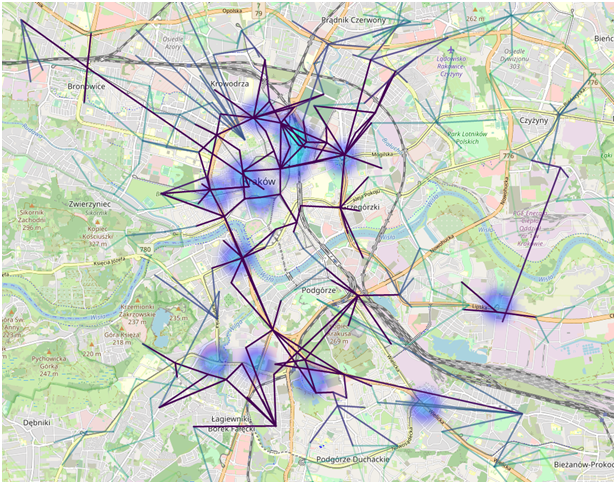 Spreading potential in public transport - the darker the line, the more likely the virus is to occur due to the higher passenger flow. The stops from which samples were collected were also marked. The indicated locations were selected because they are public communication nodes.

At the beginning of April the results demonstrated that the disinfection carried out by the city is effective and only one sample was positive in selected locations.

The detailed results of the tests were submitted to the relevant services for analysis and possible modification of procedures.

Researchers stress that in case of alterations in movement restrictions, further environmental analysis is essential to show the increasing risk before symptomatic patients appear.

"The procedure for disinfecting public spaces seems to be effective and should, therefore, be continued or extended. Particular attention should be paid to the disinfection of touch screens and keyboards in apparatus such as ticket machines or ATMs". - say the scientists from the MCB.

We remind you that regular hand washing and avoiding touching your face is the best way to prevent infections.

Link to the article on the City of Krakow website.