Virus like particles (VLPs) are structures composed of viral proteins. While they are able to  transduce human cells, they do not carry nucleic acids. Possibility of biotechnological modification of VLPs, such as encapsidation of heterologous moieties or surface encrustation with foreign epitopes, renders VLPs versatile delivery platforms and effective tools for immunization.
The aim of this project was to obtain VLPs from structural proteins of human coronavirus NL63  (HCoV–NL63) - an enveloped, positive stranded RNA coronavirus causing mild respiratory infections. The advantage of HCoV-NL63 based vector is the narrow tropism of the parental virus, which infects only ciliated cells of human airway epithelium, inherited by VLPs.

First, HCoV-NL63 VLPs were produced using baculoviruses in insect cells. Subsequently, several modifications of proteins forming VLPs were implemented, such as tagging or incorporating heterologous proteins, in order to investigate their plasticity. It was found  that VLPs support substitution or modification of some structural proteins. Next, method of affinity based purification of HCoV-NL63 VLPs was developed and optimized. Importantly, functionality of the obtained vectors in terms of cell transducing capacities was shown using cell line model and the in vitro 3D model of human airway epithelium, lining conductive airways of the respiratory tract. Finally, assessment of immune response elicited by HCoV-NL63 VLPs in animals revealed that these nanoparticles display low immunogenicity.
In conclusion, different variants of functional, non-replicative and tissue specific HCoV-NL63 based vector were obtained and characterized. This study constitutes important basis for further development of a promising delivery platform that could be used for targeted transfer of therapeutics. 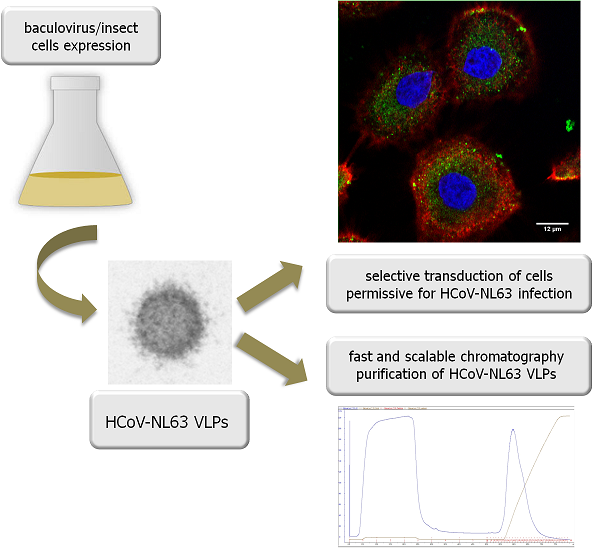